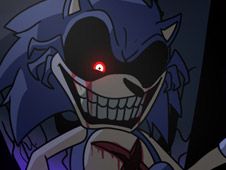 What is FNF Hellbent vs Lord X?

Lord X, an evil Sonic, has just returned to the world of FNF for you to face off against him, and this is what we invite you to do right now on the new track called 'Hellbent'!

When the floating arrow symbols match above your character to the right, that is when you press the identical arrow keys, and if you can keep doing it until the song concludes, you win, but be careful not to miss hitting said notes multiple times in a row, since that leads to you losing. Good luck, enjoy!