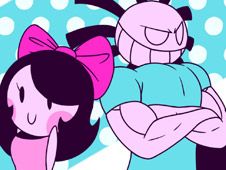 Twinsomnia Excitement is a brand new FNF fan-made mod for which you should definitely be tons of excited about, since it features these two original characters in a brand new light, as you get to face off against them on a whole new tracklist:

It's time for some Twinsomnia Excitement in FNF!

After making your choice between the story mode and free play mode, in either case, make sure to win against the two twins by reaching the end of the songs, which you do in turn by playing their notes according to the charts.

So, when you see floating arrow symbols match above BF's head, press the identical arrow keys to hit your notes, and make sure not to miss doing it too many times in a row, which leads to you losing. Good luck, enjoy!