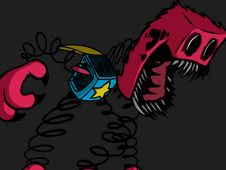 What is Friday Night Funkin: VS Boxy Boo?

Boxy Boo from the Poppy Playtime universe is now in the world of FNF Games online, where you and Boyfriend have to face off against her on one song called 'Peek-a-Boo'.

Defeat Boxy Boo in the world of FNF!

Watch when arrow symbols match on the top right side of the screen, and press the identical arrow keys at the same time, doing it until the song ends to win while being careful not to miss too many notes in a row, because if that happens, you end up losing and having to start again from scratch. Enjoy!