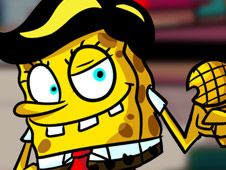 What is FNF vs Spongy (Oneshot)?

FNF vs Spongy is yet another awesome Oneshot with this popular Nickelodeon character, whom you now have to defeat on only one song, as advertised, and we're positive that you are going to have an absolute beast of a time from start to finish, just like it had been the case for us when we already played it!

Can you defeat Spongy in this new FNF Oneshot?

If you think so, reach the end of the song to win, the only way to achieve it, doing so by hitting notes according to the charts until you reach the end. To hit those notes, press the arrow keys at the same time as the identical arrow symbols match above BF on the right.

If you miss too many notes in a row instead, your health bar depletes and you lose, so make sure not to let that happen, but win and have fun instead. Enjoy!