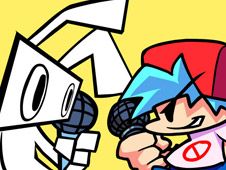 Gecs is the band that all the young people are listening to at the moment, and this game takes their highly-popular hyper pop song called Stupid Horse and brings the character from its fan animation to go up against Boyfriend, so if you think you can help our protagonist win, you are invited to try it out!

To win the musical battle you need to reach the end of the song and turn the progress bar in your favor by that time, something for which you use the arrow keys to play and sing the notes of the charts at the right time. When arrow symbols above BF match one another, press the same arrows to play the song.

Be careful not to press the keys at the wrong times consecutively too much, because if that happens, you lose and have to start all over again, and we hope you don't let that happen. What are you waiting for? Start right now, and stick around for all the fun still to come! Good luck!