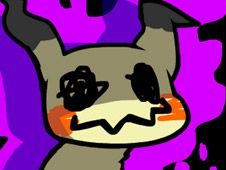 What is Friday Night Funkin vs Mimikyu?

We think that there should be more FNF Games with Pokemon on our website, and in general, so we are putting our money where our mouths are and offering you all right now the latest mod like that from our website, a game called Friday Night Funkin vs Mimikyu, where Mimikyu is a sad Pokemon who can only be made happier by musical battles, so help Boyfriend face off against him on the custom song called Look at me.

Can you help BF defeat Mimikyu, the Pokemon? Catch all those notes!

You've won once you've reached the end of the song and the progress bar is in your favor, and you already probably knew that. To achieve that, you need to hit the notes of the songs at the right times.

This means that when you see arrow symbols above BF match one another, you match them by pressing the arrow keys on the keyboard at the same time.

Be careful not to miss too many notes in a row, because if that happens, you lose and need to start all over again from scratch. Good luck!