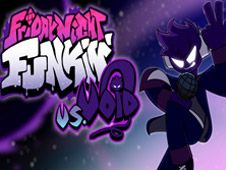 What is Friday Night Funkin’ vs Void?

Void is a pop-star that has come from the star, and he looks like a blank cosmic man, whose ego is as massive as a black hole, so of course, he wanted to challenge Boyfriend to show he is the best, which is why you are here to play the Friday Night Funkin’ vs Void mod and put this new character in his place, because BF remains champion, no matter what! This awesome mod features three original songs:

You are going to use the arrow keys to hit the notes of the songs at the right time. How? Well, when you see the arrow symbols are matching above BF's head, press the same arrow key on the keyboard, and if you get that timing right until the end of the song, the progress bar will tilt towards you, and you win.

Be careful not to tap the keys at wrong times, or tap the wrong keys, because too many mistakes of this way in a row will cause you to lose the game, and you will have to start again. Good luck, and we hope that you stick around to check out all the other cool new FNF mods online of the day!