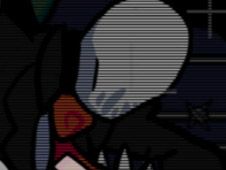 What is Friday Night Funkin vs Slenderman?

Slenderman is a creepypasta character that has slowly risen from his internet infamy to the status of urban legend, and you now have to face off against him in a music battle, since it seems that this would be the only way that he will stop bothering Boyfriend, and that is how this character manages to escape the horrific world he was thrown in.

Defeat Slenderman on the following songs:

Do you have what it takes to defeat the one and only Slenderman, through music?

Well, you are going to be able to battle this character in either the story mode or the free play mode, it's up to you, and you win the battles by reaching the end of the songs and playing all of their notes along the way. To do this, press arrow keys at the same time as arrow symbols above BF match with one another.

Be careful not to press the keys wrong too many times in a row, because if that happens, you lose and have to start the game again from scratch, and why would you want that to happen, right? Good luck, and enjoy!