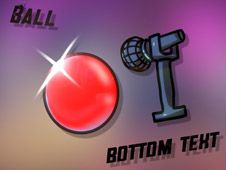 What is Friday Night Ballin’ (Vs. Ball)?

You can never really know what kind of new antagonist Boyfriend will have to face off against in musical battles, just like you will see being the case right now, when he will fight a literal ball, a red ball that has a microphone with it, but it also got rhythm, as it is ready to challenge Boyfriend on no less than three original songs, and you will help him win them all:

Who's got a better rhythm? You, or a ball?

You can choose to go up against this antagonist in either the story mode or the free play mode, and in both of them, your goal is reaching the end of the songs by playing all their notes along the way, until the song is done with, and the progress bar is towards you.

To do that, when you see arrow symbols above BF match one another, know that it is at that time you have to press the same arrow keys, something we hope you keep doing until the end because if you miss too many notes, you lose. Enjoy!