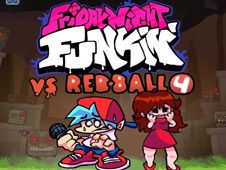 Red Ball 4 is such a fan-favorite of the series that the game has now crossed over into the world of FNF, which is why we could not miss the chance to share this brand new mod with you as soon as we could, which is the reason why right at this moment you get to enjoy the following six custom songs:

Boyfriend Vs Red Ball 4, let's roll with the music!

Make a choice between the story mode and free play mode in the game's main menu, and then give it your best to reach the end of the songs by playing all their notes according to the charts.

As the song progresses, when your turn to sing comes, you will see arrow symbols match above BF's head, which is when you press the identical arrow keys.

Keep doing it until the song concludes to win, but know that missing multiple notes in a row leads to you losing and having to start again from scratch. Enjoy!