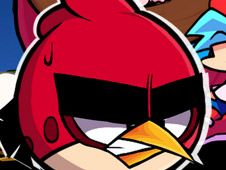 What is FNF Vs Red Bird?

FNF Vs Red Bird is a brand new rhythm game featuring the Angry Birds, where you get to measure up against this winged character on two new songs:

Whether you are playing in the story mode or free play mode, winning is achieved in the same way, by reaching the end of the songs, something that you can only achieve by hitting your notes according to the charts until there.

To do it, press the arrow keys at the same time as the identical arrow symbols match above BF, on the right. Know that missing your notes multiple times in a row leads instead to your loss, which happens if your health bar is depleted!