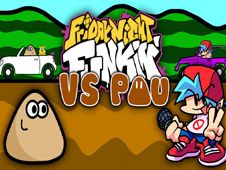 What is Friday Night Funkin’ VS POU?

Pou used to be one of the hottest mobile app games on the entire internet a few years back, with most kids and even many adults having a Pou to raise, with the brown character having to be tended to day after day, with you acting sort of like his babysitter. Well, he has now grown up, and he has challenged Boyfriend to a musical battle, so help the protagonist defeat this brown poop right now, on all these awesome songs:

Boyfriend VS POU, the battle of internet stars!

It's your choice if you face this character in the story mode or free play mode, but you have the same goal in both, which is playing all the notes of the songs at the right time in their charts, winning the battle once you've reached the end of the songs.

To do this, press arrow keys at the same time as the arrow symbols above BF match one another but be careful not to miss pressing the keys too many times in a row, or you will end up losing. Enjoy!