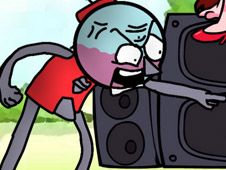 What is FNF Vs Benson Dunwoody?

Benson is a well-known character from Cartoon Network's Regular Show, who has now come over and transitioned to the FNF Games category of our website, where you and BF will battle against him in a rhythm battle on a really cool new song known as 'Fired'.

***Updated to include new graphics and a new song known as 'Demoson'.

Boyfriend Vs Benson, not your regular rhythm battle!

Hit the play button to start, and, then, hit all the notes of the songs at the right time in their charts, something you have to keep doing until the song concludes to win it.

To do this, when arrow symbols above BF match one another, you need to press the same arrow keys from the keyboard. Be careful not to miss the moment too many times in a row, because you end up losing then. Good luck, enjoy!