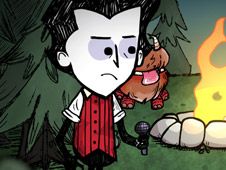 What is Funkin’ with Wilson (Don’t Starve)?

FNF crosses over with the Don’t Starve universe right now and here, where you and Boyfriend will go up against the character known as Wilson, described as a Gentleman Scientist, who you will now face on three awesome new tracks:

Funkin' with Wilson from Don't Starve has never been more fun, start it right now!

Whether you choose to play in the story mode or free play mode, to win you need to do the same thing, which keeps hitting your notes according to the charts until the end of the song.

So, when you see floating arrow symbols match above BF, you need to press the identical arrow keys to hit your notes. Missing to do it too many times in a row leads to you losing the game, so focus on not letting it happen. Good luck, enjoy!