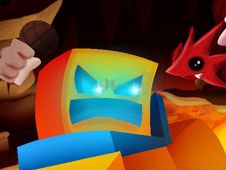 What is Friday Night Dashing?

Friday Night Dashing represents another crossover between FNF x Geometry Dash, even bigger and better than the previous one, something that is quite evident from its extended tracklist:

It's time to do some Friday Night Dashing!

Whether you play in the story mode or free play mode, to win you need to do the same thing, which is hit your notes according to the charts until the end of the song, doing so by pressing arrow keys at the same time as the identical arrow symbols match above BF.

If you press them too late, too early, the wrong ones, or do not press them at all, you miss notes, so if you miss too many notes in a row, you lose, something you should be careful about. Good luck, enjoy!