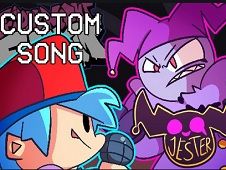 Boyfriend has a new challenge, and you will have to help him win back his girlfriend, respectively Girlfriend! This time he arrives at the circus, and it seems that Jester wants to fight against him in order to steal his girlfriend from him. We invite you to join Boyfriend and try to help him in his new attempt to succeed in winning this mission as well.

Who was Jester from Friday Night Funkin '?

Jester was one of the first clowns of the Middle Ages, who managed to entertain the most important people of those times, kings, emperors, queens, and high officials of the palace. He had the ability to dance and do all sorts of acrobatic movements that made him famous in those days. At the same time, his costume was an original one, specially created by him to be able to stand out.

In the new mode, you will have to dance to three new songs, and these are:

Use the arrows to fight against the clown!