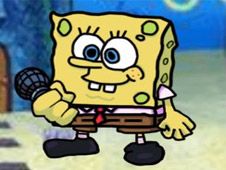 What is Sponge Night Funkin'?

It was honestly only a matter of time before we would have new FNF Games with SpongeBob online on our website, since this category has gathered mods featuring lots of famous characters from pop culture, and SpongeBob has been around for decades and is beloved by so many people, which made us expect him to appear in the series, of course, and he is now the protagonist in this awesome new game called Sponge Night Funkin'!

Defeat Spongebob in a rhythm battle under the sea!

We don't think that Spongebob needs an introduction! He is a yellow sponge living under the sea, in the town called Bikini Bottom, together with other sea creatures and other interesting beings, and he works at a burger joint, is always looking for adventure, and is kind of dumb.

Instead of Boyfriend, Spongebob is going to have a rhythm battle, and the antagonists you know from the original game are replaced with people like Planktoon, Patrick, Sandy, and other beloved characters in the series.

What you do is press the arrow keys on your keyboard at the same time when the same arrows match above Boyfriend's head, and if you get the correct key and the correct timing, you advance through the song, which you need to take all the way to its end.

Be careful not to miss too many of the notes one after another, since that ruins the song too much, which means you lose and then have to start all over again! Good luck!