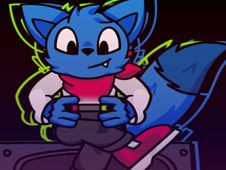 What is Friday Night Gaming vs Loki?

The Friday Night Fun you get to have on our website continues, and it does not even need to be Friday, something that we're going to prove to you right now and here, as we're happy to have added for you all a new and awesome game called Friday Night Funkin vs Loki, where Loki is a blue fox with red sneakers and a bandana in the same color, a childhood friend of BF and GF who wants only to play games and chill out.

His songs are the following:

If you're a beginner, learn how to play FNF Games right here:

To defeat your antagonist for this week you need to have a better rhythm, and take the song all the way to its end. Use the arrow keys to hit notes of the song, pressing them at the same time as they match above BF's head, no sooner or later, and without hitting wrong keys, as too many of these mistakes, one after another means you lose the game.