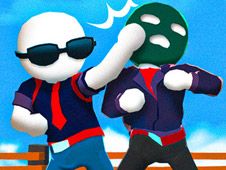 What is Gang Fall Party?

Gang Fall Party is a brand new and amazing multiplayer io game in 3d that is also a local 2p game at the same time, a game that features stickman avatars with all sorts of awesome skins available in-game, where you and other players are thrown in an arena, with only one of you coming out as the victor. We hope it's you!

When you begin, only two skins are available, one that looks like an assassin from Assassin's Creed, and another one that looks like a gang member. The other ones, if you want to unlock them, you have to win fights, and, in return, get coins, coins which you can use to buy those skins.

In the same arena that you are thrown, if you're playing in the 1P mode, you will have a total of sixteen players, and you have to kick and punch the other ones, winning fights until you remain the last one standing. Be careful not to get thrown out of the arena to the sides, or you will lose.

If you play the 2P mode, only two players, using the same machine, will fight one another, and you do it with the following set of controls:

We now wish all the players good luck and lots of fun as it is possible to have only here!