FNF vs Link (Legend Of Zelda) 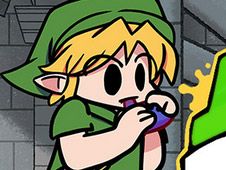 What is FNF vs Link (Legend Of Zelda)?

Link is the main character in the Legend of Zelda Games series, and one of the most iconic video game characters in the entire world, so we are not even in the least surprised that he has now made an appearance in our category of FNF Games online, where he is now the latest antagonist that you and BF will have to face, and you will do it on the following custom songs:

As it is customary for full week mods, you can challenge this character in either the story mode, where you've got cutscenes, dialogues, and, of course, a story, or you can pick any one of the songs you want from the free play mode.

When you see arrow symbols above BF's head match one another, at that moment you will have to press the same arrow keys yourself, and you need to keep doing it until the song ends if you want to win.

Be careful not to miss pressing the keys too many times in a row, because if that happens, you will have lost and be forced to start all over again from scratch. Have fun!