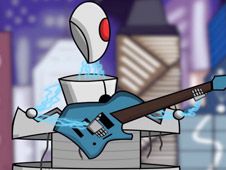 What is FNF vs Djentbot Full Week?

Djenbot is a robot who loves metal music, and knows how to play the 8-string guitar, with him being the latest antagonist that you and Boyfriend will face off against in a musical battle of rhythm, something we are excited to invite you all to do right in this full week mod that has the following custom songs:

Use your great reaction skills to defeat the Djenbot!

Whether you play this game in the story mode or free play mode, you have to give your best to play all the notes of the songs according to their charts, something for which you use the arrow keys, as you need to press them at the same time as the arrow symbols above BF's head match with one another.

Be careful not to miss that moment too many times in a row, because if that happens, you will have lost and will be forced to start all over again from scratch, which we definitely don't wish for you, but instead we wish you the best and lots of fun to have!