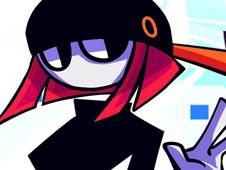 Nikku is a girl that came from space, and upon arriving on Earth, she immediately seeks out BF for a rap battle, something that you will have to help our protagonist win, and you are going to do it on two awesome hyperpop songs:

Do you have what it takes to defeat Nikku from Hotline 024?!

If so, pick if you want to challenge this character in either the story mode or free play mode, and then give it your best to reach the end of the song by playing all of its notes according to the charts, so when you see arrow symbols above BF's head matching, press the same arrow keys.

Be careful not to miss pressing the keys too many times in a row, because if that happens, you will have lost and have to start again from scratch. No matter how you play the game, we wish you all the best, and tons of fun as only here is possible!