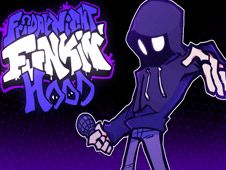 What is Friday Night Funkin vs Hood?

As you could probably guess, today is going to be yet another day filled with some of the best new FNF mods online on the internet, so for that very reason we are now excited to be sharing with you the game known as Friday Night Funkin vs Hood, where a shadowy figure wearing a hood is the next opponent for you and BF, and you will face off against him on all these following songs:

Boyfriend VS Hood, get ready for action!

Well, for starters, you need to know that this game can be played in two ways, with dialogues and cutscenes in the Story Mode, or in the Free Play mode with none of that, just you picking the songs you want to battle on in any order you wish.

Either way, the goal remains the same, which is to play all the notes according to the charts, reaching the end of the songs by doing that in order to win.

Be focused, because if you miss pressing the keys too many times in a row, you lose the game and have to start it again from scratch. Good luck, have fun!