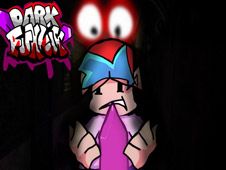 What is FNF vs Dark Deception?

It's a new day, so it means a brand new chance to have fun with the best new FNF Games online, just like we prove to you in this instant when we offer you the awesome new game known as FNF vs Dark Deception, where characters from this scary universe have come to battle BF for Halloween, such as Lucky the Rabbit, Dread Ducky, and you do it on some awesome songs which include the following:

Defeat the scary characters using the power of music!

After choosing between the story mode and free play mode of the game, no matter the pick, your goal remains the same, and it is to reach the end of the songs by playing all their notes according to the charts, something you do use the arrow keys.

This means that when arrow symbols above BF match one another, you will have to press the same arrow keys from your keyboard, but be careful not to miss doing it too many times in a row, since that leads to you losing and having to start again from scratch.

Good luck, we wish you the best, and hope to see more of you here today, where fun never stops!