Funkin’ On a Monday – Vs. Garfield 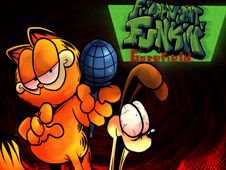 What is FNF’ Vs Gorefield (Garfield)?

Gorefield is what Garfield now became in the world of FNF, and this new version of the tomcat is quite a scary one, so let's defeat him through a rhythm battle by helping BF and bring him back to his former self, as lazy as he was. This is a full week mod featuring the following tracks:

After making your choice between the story mode and free play mode, give your best to reach the end of the songs by playing all their notes according to the charts and turning the progress bar towards you to win.

To hit the notes, when you see arrow symbols float and match above BF, that is when you press the identical arrow keys. Don't miss doing it multiple times in a row, or you lose. Good luck and all the best we wish you all!