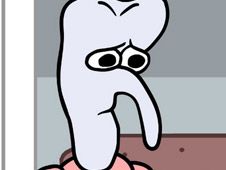 What is FNF vs Smiling Friends?

Charlie and Pim from Smiling Friends have arrived at the house of Mr. Man, where they are now engaging in a 'friendly' rap battle with one another, one that we invite you to win right now with one of the best new FNF mods we've prepared you, on the song called 'headache'!

Let's sing with the Smiling Friends in FNF!

You need to reach the song's end by playing all your notes according to the charts, so when you see arrow symbols float and match above your character, that is when you press the identical arrow keys. Be careful not to miss hitting notes too many times in a row, or you need to start again from scratch. Good luck, all the best we wish you all!