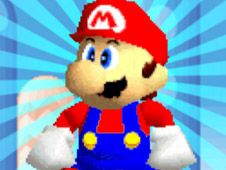 What is Super Mario vs Wario?

Super Mario vs Wario is a racing game between the Italian plumber and his evil nemesis, made in his image, but really bad, whom we now invite you to defeat right now and here in a running race set in the world of Mario Games that we know you already love a bunch, just like we did!

It's Super Mario vs Wario, who will win the race?

Jump over bricks, as they are obstacles, and also do it over the kappa turtles, because if you touch them, they decrease your speed, and Wario gets to speed up ahead of you. Instead of representing score, as they usually do, coins in this game are speed boosts, so collect them when you happen upon them and get faster!

Use the arrows to move and jump, obviously, skills that you will develop in the first of the eight levels, which is the tutorial, and then they get increasingly more difficult as you proceed, but also more fun, as we guarantee with all of our games!