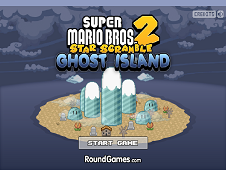 Mario Bros is back again, with definitely the greatest challenge ever, such a great remake of the real adventure of Mario, who was so famous in the last century among the kids of all ages so let's get to the work right now, before there will be too late and help Mario do the usual stuff, jumping on platforms, climbing on the highest ones, collect money and golden coins, avoid deadly creatures and of course, killing the ones he can by jumping on them. Super Mario Star Scramble 2 is the second version of Super Mario Star Scramble, and the theme is different now, because the adventure happens on an island, which belong to a ghost. That's exactly why it's named ghost island so let's find the coins right now and dodge the ghosts in order to kill their chances to catch you and also make sure that you will not run out of coins to collect. It is so important for you to collect Mario bonuses and this way you can unlock different stages and levels of this game. Go for it now and pay attention to the details, using the arrow keys for moving and of course, the SPACE bar or Z key for jumping with your little Italian hero! There is a time limit in the top side of the game screen so do not run out of it!