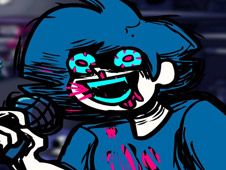 What is Friday Night Funkin vs Starving Artist?

There are still plenty more new Friday Night Funkin mods online for free we can offer you here on our website, something that we prove to you right now with the addition of Friday Night Funkin vs Starving Artist, which features new music and new characters, which is what we know fans of this series look forward to whenever they visit our website!

Who is Rebecca, the Starving Artist?

Well, Rebecca is just like many of the people who create these mods you love so much, meaning that she is a talented artist who puts lots of awesome work into the world, but is not getting paid as much as she should, which is why she is starving. She aims to be a popular cartoonist to whom her parents can be proud of, and we hope she achieves this, but first, she has to defeat Boyfriend in a musical battle.

Well, you will play for Boyfriend and try to defeat her, something you do on the songs called Hunger, Aspirer, Crybaby, and Empty.

How to play FNF mods online:

In this rhythm game, you use the arrow keys to hit the notes of the songs, having to press the arrows on your keyboard at the same time that the same arrows over BF's head match one another. Be sure not to press them too early or too late, because that means you miss the note, and missing them too many times in a row means losing the game.