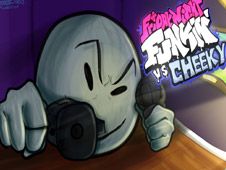 What is FNF vs Cheeky v2?

It is time for us to make our return into the highly-acclaimed category of Friday Night Funkin Games online of our website, where right at this moment our team is delighted to share with everyone the new game called FNF vs Cheeky v2, where Cheeky is a huge ball that holds a microphone in one hand and a gun in another, and that is because he is a kidnapper, one who took away Girlfriend, so now Boyfriend has to defeat him in a rhythm battle to get her back.

Help Boyfriend save Girlfriend by defeating Cheeky on the following songs:

How to defeat Cheeky, explained:

When the arrows that float around Boyfriend are matching with the symbols above his head, at that exact same moment you will press the same arrow on your keyboard to play that note in the song's chart, and if you do that to the end of the song and the progress bar is in your favor by then, you win.

Do your best to make sure that you don't tap the keys at the wrong times too much because if that happens you lose the game and have to start again. Good luck!