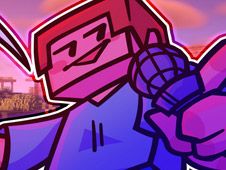 What is Friday Night Mining vs Steve?

Today on our website, the FNF Games and Minecraft Games categories, two of our most beloved ones and most popular ones are crossing over in the game called Friday Night Mining vs Steve, where Boyfriend has to go up against Minecraft's Steve, doing it on the song called Slash, with our team hoping that you will help the protagonist win!

Boyfriend VS Steve from Minecraft, who wins?

To kick things off, choose between the story mode and the free play mode of the game, and then choose a level of difficulty. You win by reaching the end of the song and playing it so well that you have turned the progress bar in your favor, simple as that.

When you see the arrow symbols match above BF, at the same time you have to press the same arrow key on your keyboard to hit that note of the song, but be careful not to make too many mistakes in doing so, or you lose the game.

Good luck we wish to all players, and we hope to see more of you here today, and any other day for that matter!