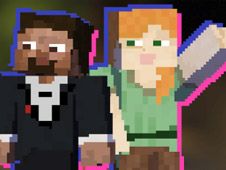 What is FNF The Whole Ass Vs Steve Mod?

We've had FNF Games with Minecraft Steve added before on our website, but those were demo versions, and some of them did not even have original songs, but that is far from being the case right now and here, when our team is delighted to share with each and every one of you the game called FNF The Whole Ass Vs Steve Mod.

Despite this being a demo of the full mod that is soon to follow, we've got plenty of songs in it, in both the story mode and free play mode, such as:

Do you have what it takes to challenge Steve and all the other Minecraft characters?

In the battle of music, when it comes to your turn, you will see that arrow symbols above BF match with one another, and it is at that same moment that you have to press the very same arrow keys, something that you have to keep on doing until the end of the songs in order to complete them.

Of course, this also means that if you miss to press too many keys in a row, you lose the game and have to start the song again from scratch. Good luck we wish you all, and a ton of fun as only here is possible!