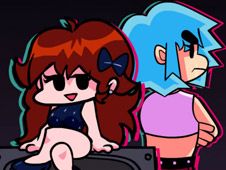 What is Friday Night Funkin: Kick Ass Kin (Vs. Cuz)?

Cuz, Boyfriend's Cousin is a demon hunter who is going after GF because her parents are demons, and you now need to help the protagonist win the battle against this new character, sometimes even teaming up with her, on three new songs we're sure you will love:

It's time for FNF Kick Ass Kin Vs Cuz!

In either of the two modes you will be playing, you will need to reach the end of the songs by playing their notes according to the charts, which is how you achieve victory.

So, at the same moment as arrow symbols match above BF, press the identical arrow keys. Make sure not to miss hitting said notes too many times in a row, you will lose instead. Good luck, enjoy!