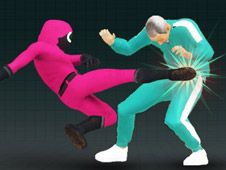 What is Squid Fighter?

Time has come for you to finally play fighting games with squid game online, which is precisely what we offer you right now in the awesome 2 player battle game known as Squid Fighter, which is a 3d game where you can become various characters from the Netflix show that you love, and enter an arena to have a match to the death with one another!

Fight your way to win in the Squid Game arena!

First, let's start off with how you control your characters:

Player 1 will assume the role of a red guardian, while Player 2 will become player 001 from the show, and you will take part in a 3-round battle where you have to get two wins to become the champ.

Kick, punch, and attack your opponent in order to deplete their health bar first, because if you can empty it out before they can do the same to you win, simple as that.

Now that you know this, we invite you to start the fun right now, and hopefully, you check out even more games from this category, brought over only for you!