Stickman That One Level 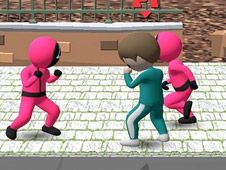 What is Squid Game Fighting?

It seems that the mixture of fighting games online with Squid Game had been received very well in previous games of that nature in this category of our website, which is why we are excited to bring you a brand new one as well, where a multiplayer element has also been added into the mix, so now you can fight against real people, not just against bots!

Fight your way to winning the Squid Game!

You can choose to battle against computer-generated characters by the computer and have to go on the street while you kick their asses, or you can play against other real players in the multiplayer mode, where you enter rooms made by other players, or create one yourself.

Either way, you have to hit the opponent more times than they hit you so that you deplete their health bar and completely eliminate them. You only have one character to be for starters, but winning oranges gives you the chance to unlock new ones.

Use the arrow keys to move, Z to punch, X to kick, C to guard, V to grab opponent, use space to jump. Now you know how to battle and win the Squid Game, so do it right now, you won't regret it!