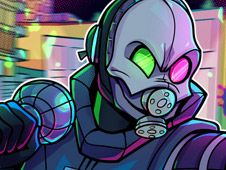 What is FNF vs WonderNope?

A Russian YouTuber by the name of WonderNope is the latest antagonist that you and Boyfriend will have to face off against and defeat in a rhythm battle, something we invite you all to do right now with FNF vs WonderNope, a mod where you will play on the following songs:

Whether you play in the story mode or free play mode, that is your choice, and in either case, the way you win remains the same, by reaching the end of the songs, which in turn you do by playing all their notes according to the charts.

How? Well, you watch for when the arrow symbols match above BF's head, and at the same time press the identical arrow keys. Make sure not to miss doing that multiple times in a row, or you lose and have to start again from scratch!