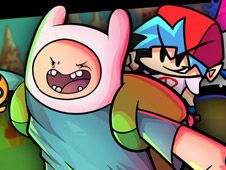 What is Friday Night Funkin vs. Finn The Human?

Boyfriend from FNF ended up in Adventure Time, and he met up with Finn the Human, with the two protagonists now having a rap battle against one another on the song called 'Hero'!

Become a musical hero with FNF Vs Finn of Adventure Time!

To win you need to reach the end of the songs, and to do that you need to play your notes according to the charts. That is done by pressing arrow keys at the same time as the identical arrow symbols match above BF. Be careful not to miss hitting notes too many times in a row, or you lose. Good luck, and all the best we wish you all!