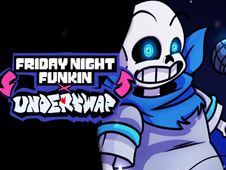 What is FNF X UnderWrap?

The FNF X UnderWrap mod is a brand new FNF x UnderTale crossover where we are sure that you will have tons of fun from start to finish, as you always do, even more so now that we have this extensive brand new tracklist:

Try the FNF x UnderWrap mod for some amazing fun!

Whether you are playing in the story mode or free play mode, to win you have to do the same thing, which is reach the end of the songs, something only possible by playing your notes in the charts according to it, without missing too many notes in a row, because you then lose.

To hit said notes you press arrow keys at the same time as the identical arrow symbols match above BF's head, but pressing keys early, late, or the wrong ones leads to missed notes, so focus and give your best to win!