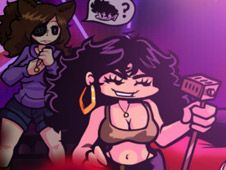 Three Baddies of FNF are here to battle you and BF in a rhythm battle, so do you think you can defeat all four of them? We're talking about Stalker Girl, Cassette Girl, Jazz, and NekoFreak, and you will duel them on quite an extensive tracklist:

Whether you are playing in the story mode or free play mode, give your best to reach the end of the songs by playing their notes according to the charts, which is how you win. How do you do it? You press arrow keys at the same time as the identical arrow symbols match above BF. Don't miss doing it too many times in a row, or you lose and have to start again from scratch. Good luck, enjoy!