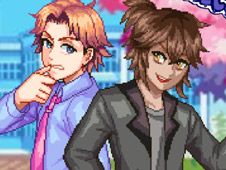 FNF Hating Simulator – School Conflict is here for all you fans of Senpai out there, of which we know for a fact there are many, as Week 6 of this popular rhythm game has always been one of the most beloved ones, and Senpai now has a new opponent in the form of Zakk, a transfer student who you will become here, and who you will help do battle on the following songs:

A School Conflict is happening in the FNF Hating Simulator, let's win it!

Whether you're playing in the story mode or free play mode, winning is achieved in the same way, by reaching the end of the songs and to do that you need to hit your notes according to the charts until that point.

To do it, press the arrow keys at the same time as the identical arrow symbols match above Zakk. If you miss doing it too many times in a row, you lose and have to start again from scratch. Good luck, enjoy!