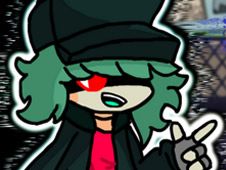 What is FNF vs Garnnie?

You wanted it, now you get it! On our website, you can now play the FNF vs Garnnie mod, which features Garnnie, who, if you did not know, is the cute female version of Garcello, one of the most popular mod characters of this series so far, and we're positive that you will love this girl version even more, but still defeat her in a musical battle, something that you do on the original track called Unleased.

Boyfriend Vs Garnie, a rhythm battle you don't want to miss out on!

Just like in the series' previous games, your goal is to help BF win the rhythm duel, and to do that you need to play and sing the songs according to their charts, something that you do use the arrow keys. When the arrow symbols floating around BF match with those above his head, that is when you press the same arrow key.

Be careful not to press the wrong keys, or press the correct keys but do it too late or too soon, because that counts as a miss, and if you make too many misses one after another, you lose the duel. But, if you don't, and the progress bar is in your favor by the end of the game, you will have become the winner! Good luck!