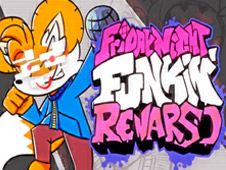 What is FNF vs Renarso?

Renarso is a secret agent who looks like a fox, and agent-stuff is not the only thing he is good at, because he is also a really good musician, and we don't know if he challenged Boyfriend because of his mission, or just because he wanted to do it, but he is doing it, so now that the two are having a rap battle, we invite you to help our protagonist win on all the following tracks:

Can Boyfriend defeat Renarso? With your help, for sure!

You can challenge this character in either the story mode or the free play mode, it is totally up to you, and in both of them, your goal is to get the notes of the songs at the right moments so that you reach the conclusion of the song and win with the progress bar in your favor.

To do so, simply tap arrow keys at the same time as you see the arrow symbols above BF being matched with one another, but be careful not to press them at wrong times, because too many mistakes in a row will cause you to lose the game.