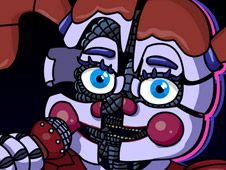 What is FNF vs Circus Baby?

The Circus Baby from FNAF is finally making its debut in the world of FNF, and we now invite you to defeat her in this new and interesting mod on the song called 'A new Friend'!

Face your fears against the Circus Baby!

Winning in these rhythm games is achieved by hitting your notes according to the charts, something you do by pressing arrow keys at the same time as the identical arrow symbols float and match above BF. Don't miss doing it too many times in a row, or you have to start again from scratch. Enjoy!