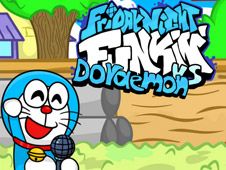 What is FNF vs Doraemon?

FNF vs Doraemon is here to bring you one of the most popular characters in Japanese animation, one that has been around for decades, and new generations of children love him just as older people do, and you and BF will now go up against him in a rhythm battle, as well as other characters, on the following tracks:

Whether you are playing in the story mode or free play mode, winning is achieved in the same way, by reaching the end of the songs, which is done by hitting your notes according to the charts.

To do it, press arrow keys at the same time as the identical arrow symbols match above BF's head. Don't miss hitting them too many times in a row, or you lose and have to start again from scratch. Good luck, enjoy!