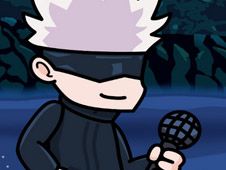 What is FNF vs Satoru Gojo (Jujutsu Kaisen)?

As you will see right at this moment, the world of FNF Games online and Anime are coming together for you all here once more, as right in this moment you are all invited to have tons of fun with the game called FNF vs Satoru Gojo (Jujutsu Kaisen), where Satoru Gojo is a teacher at an academy for people who learn to hunt demons, ghosts, and curses, and he the strongest curse user in this world. Can he also prove to be a master of rhythm, against Boyfriend?

Well, you play on Boyfriend's side, so we really hope that you help him out to win the musical battle that you will do on two original songs which come from the anime and are openings and endings to it, and are called

Of course, your goal is reaching the end of both songs and turning the bar in your favor, something you do by hitting the notes of the songs at their right time in the chart. So, when arrow symbols match, press the same arrow keys on your keyboard, but be careful not to miss playing too many notes in a row, because if that happens you lose and have to start again. Good luck!