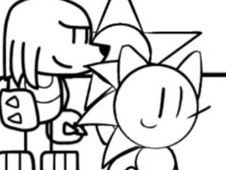 Rhythm battles between FNF's BF and Sonic are always a ton of fun to be had from start to finish, but there are so many such mods here that it might have become a bit stale. Well, here is where this new mod comes in, where you have the characters drawn like sketches in a freehand-style, with you having two awesome tracks to enjoy:

BF Vs Sonic, now in a sketch battle of rhythm!

Whether you are playing in the story mode or free play mode, to win you do the same thing, which is playing your notes according to the charts until you reach the end of the songs. If you miss hitting notes multiple times in a row, you lose and have to start again from scratch.

How do you hit notes? You press arrow keys at the same time as the identical arrow symbols float and match above BF's head. Misses happen when you press the wrong keys, or the correct ones too late or too early. Let's begin right now, have fun, and don't stop here, because more fun is coming soon, only here!