FNF vs Pompom and Mackie 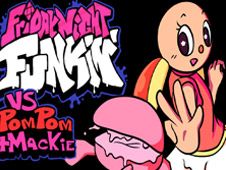 What is FNF vs Pompom and Mackie?

We've had FNF Games with Pompom before, but now we've got an updated version where a new character by the name of Mackie also joins in the fun, we've got awesome new custom songs for you to enjoy, so you have already multiple reasons why this is a must-play new game for the day!

Pompom is a cute girl who is a hybrid between a cute puppy and a girl, and she wears a primarily orange outfit, which everybody in the FNF community loved at first sight! Mackie is her macaroon pet, whose flavor is strawberry, and its color is pink, and now can also sing, as he is the newest character you can have a rhythm battle with.

For Pompom's week, you will have the songs called Sugar-Cookie, Key-Lime, and Stomach, and for Mackie's week the songs are called Biscuit, Gateau, and Pom-Pomeranian, all being lovely songs we're sure you will enjoy plenty!

How do FNF Games work?

If you're new here, that is your first question, as you might not have played many rhythm games here before! To show good rhythm you have to hit all the notes of the song at the right time, so when you see the arrows over Boyfriend's head match with one another, press the same arrow on your keyboard, simple as that.

If you miss hitting too many notes in a row, you lose the battle, so be careful and not let it happen! We wish you good luck, a great time, and all the best!