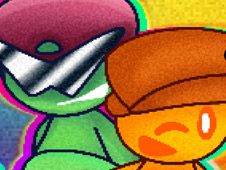 What is FNF: Byte Funkin’?

FNF: Byte Funkin’ is the newest mod to have been added into our category of Friday Night Funkin' Games online, and it is an interesting game where the designs, backgrounds, and sprites have all been revamped to resemble the world of pixelated games and the era of arcade games, which is why in the main menu it says you have to put in 1 coin to start.

Other than that Boyfriend has to defeat some funky and cool new characters, and you can challenge them in either the Story Mode or Free Play mode on the following songs:

Funk it out at the arcade with Boyfriend and friends!

To play the notes of the songs you need the arrow keys, so when arrow symbols above BF match with one another, you have to press the very same keys to hit the notes at their right spot in the chart and do so until you reach the song's end to win.

You lose if you miss doing that too many times in a row, so be careful not to let that happen. Good luck, enjoy, and stick around for even more fun to come!