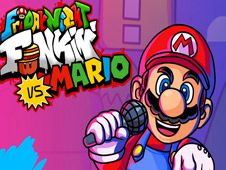 What is FNF vs Mario?

It goes without saying, but Mario is one of the most popular characters from Nintendo, and definitely one of the most popular characters in the world of video games, so we're not at all surprised that he has become the latest antagonist you have to face off against in an FNF game, as right now you're invited to check out this awesome new mod called FNF vs Mario, and have tons of fun on its three custom songs:

Boyfriend Vs Mario, who has the better rhythm?

Considering that BF is the character whose role you will play, you have to give it your best so that he wins, taking the songs to their conclusion and playing the notes so well and in tune that you turn the progress bar in your favor.

To achieve that you will have to time the pressing of the arrow keys to match the arrow symbols that match above BF's head, but you should also be careful not to miss too many notes in a row, or you lose the whole game. Enjoy!