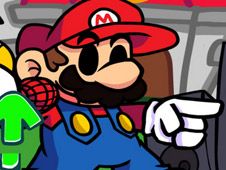 What is FNF vs Mario v2?

The fun provided by our category of FNF Games does not stop anytime soon, that's for sure, which is why we are very excited that in this moment we get to share with each and every one of you the awesome new game called FNF vs Mario v2, where once again you are going to duel Nintendo's most popular video game character, and in this V2 version you will have the following custom songs:

In either the story mode or free play mode, give it your best to reach the end of the songs by playing all their notes according to the charts, since that is the moment when you win.

How to do it? Well, watch for when the arrow symbols above BF's head match with one another, and you will have to press the same arrow keys yourself.

Be careful not to miss pressing the keys too many times in a row, because if that happens, you eventually lose and have to start all over again from scratch. Enjoy!